GenR, short for Generation Rescue, is a group of young and influential humanitarians who have joined forces with the IRC to help people affected by crisis to survive and rebuild their lives. 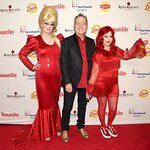