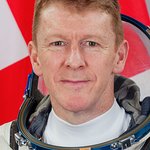 Tim also confirmed that he will be releasing a new book in the autumn entitled ‘Ask an Astronaut’ and, as with his previous book, any royalties received will be donated to The Prince’s Trust.

Tim says: “The work The Trust does, helping disadvantaged young people move into education, work or training, is something I believe is vital. I have met some of the young people supported by The Trust and I have seen first-hand what a difference the charity makes to their lives. It seemed natural to me that the proceeds I would get from my book would go towards helping such a fantastic cause.”

The cheque was presented to Tara Leathers, Director of Fundraising at The Prince’s Trust, during the Penguin Random House conference at The Barbican, London.

Tara Leathers said: “As an Ambassador, Tim has used his incredible media attention to promote our cause. And as if that wasn’t enough, he chose to donate the proceeds of his book to our work. We have been really struck by how generous and how committed Tim is to the work of The Trust. On behalf of the hundreds of young people who will be helped by the funds he has donated, we want to say a huge thank you to Tim.”

‘Hello, is this planet Earth?’, published by Penguin Random House, was a Sunday Times Number 1 Bestseller and the fastest selling popular science book since records began. It takes readers on a mesmerising tour of Tim’s historic and inspirational six-month Principia mission, based on over 150 of Tim’s stunning photographs that he took on board the International Space Station.

Tim Peake became an Ambassador in 2015, just before he went to space and the Principia mission started, and he’s continuing to highlight their work to help more young people acquire STEM skills. While in space, he also took on the Digital Virgin Money London Marathon challenge, running 26-miles on a treadmill to raise awareness of what the Trust does.