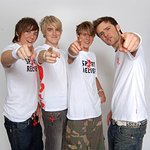 Within minutes of arriving at the Get Started course, Tom got out his guitar and joined in with a cover of Use Somebody by Kings Of Leon.

He supported the young people with lyric writing, and used his guitar skills to create an acoustic instrumental to combine with their lyrics.

The young people had the opportunity to showcase two songs which they had created, and worked towards an extra two with the advice and support of our Celebrity Ambassador.

Tom said: “I had a brilliant time meeting the young people, and taking part in the Get Started with Music course. Music is such an incredible way to bring people together to bond and be creative. Finding the confidence to share an idea is always the biggest challenge in song writing sessions, especially with people you don’t know.”

In between the performances and music making, everyone sat down to enjoy slices of chocolate cake and balloons, as the young people wished Tom an early happy birthday.

Not only did each young person enjoy the music session but they also overcame their feelings of anxiety and lack of confidence which were expressed in the reflection stage of the day.

Tom added: “It was so impressive and inspiring to see how brilliantly the group were throwing themselves into each task. Seeing the young people perform their own original material was really special, because they had never had the confidence to perform in front of an audience before.”

Check out Tom’s vlog about Get Started with Music here.