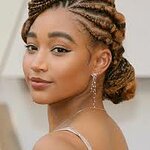 The Changemaker Award, presented by Gucci and CHIME FOR CHANGE, celebrates the next generation of activists who are championing gender equality and inspiring positive change through self-expression and active citizenship. The Hunger Games and The Hate U Give actress has received widespread acclaim for speaking out about sexual violence and for using her platforms to protest against inequality and injustice. Comedian and actress Whitney Cummings will serve as the evening’s host.

The event will also honor author Margaret Atwood as a longtime icon and champion of women’s rights, as well as philanthropist and behavioral geneticist Sue Smalley, Ph.D. for her invaluable part in making gender equality a reality through her role on Equality Now’s Board of Directors.

Speaking on the inaugural award, Global Executive Director of Equality Now, Yasmeen Hassan, said, “We are in a difficult time in history with backtracking on human rights and equality for women and girls. I see hope and great potential in the unprecedented activism of youth who are finding new ways to raise their voices against injustice. The future is theirs and we are thrilled to launch the Changemaker Award with Gucci and CHIME FOR CHANGE to recognize their passion, courage and creativity.”

“Now more than ever, it is vital to support the next generation of activists as they fight for their future, leading the charge to create meaningful change,” said Susan Chokachi, President and CEO, Gucci America. “Together with our longstanding partner Equality Now, we are honored to present Amandla Stenberg with the inaugural Changemaker Award. Amandla has the passion and courage to stand up to the injustices facing her generation. We are proud to support her work, and are inspired by her determination to advance gender equality.”

Additional details will be announced in the coming weeks. For sponsorship and ticket information, contact 5B Events at (310) 559-9334 ext. 102 or email harvin@5bevents.com.