Who Is That On The Phone? It's Clay Aiken For Charity! 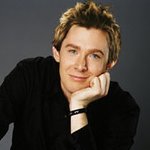 Do you want to have Clay Aiken answer your phone? Well, now is your chance, with a new auction being run by the singer’s very own charity.

The Bubel/Aiken Foundation addresses areas of the disability community traditionally under-served, providing services and financial assistance, creating awareness, and recognizing ‘Champions of Change’. It was established by Aiken – a UNICEF Ambassador who has traveled to Banda Aceh, Indonesia and Kabul and Bamyan in Afghanistan, raising awareness and funds in support of education – after working with 13-year-old Mike Bubel while pursuing a career in special education.

As well as the chance to win a personal voice recording made by Aiken for your mobile phone, you can also bid on prizes such as the original score of “Proud of Your Boy” recorded and signed by Clay Aiken for Disney’s special edition release of the hit Aladdin, as well the original stool used by Aiken on his “Soft Rock and a Hard Place Tour” with local symphonies in 2007. Also up for sale are hockey jerseys signed by the singer and golf packages.

All proceeds go to the Bubel/Aiken Foundation to bridge the gap that exists between young people with special needs and the world around them. The auction is open until January 24, and more information can be found here.