LTTS Exclusive: Celebrity Babes Come Out To PLAY For Charity 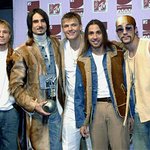 Last weekend in Los Angeles celebrities showed up at infamous Saddle Ranch Chop House on Sunset Boulevard for the second annual ‘Babes on the Bull’ charity event to benefit P.L.A.Y. (Providing Laughter and Amusement for Youth), an organization that collects new toys, books and games and distributes them to children in hospitals, shelters and other organizations.

Guests packed the Saddle Ranch for an afternoon of ’LA’s hottest girls’ riding the mechanical bull for charity with extra entertainment in the form of fire dancers (Fire Groove) and a live auction which included amazing seats at a Laker’s game, VIP booths at LA’s hippest clubs, golf outings, LA Dodgers baseball tickets and others. The best aspect of the auction was that everyone entering the Ranch-including the general public- received a hundred-dollar voucher to use towards auction items.

Warrant front man Jani Lane was all smiles as he arrived and admitted that he’s never ridden a mechanical bull.

Actor David Faustino, who lives within walking distance of the venue, was happy to lend his support for a great cause. “I figured I’d come out today and support the cause” he said on the red carpet, “I live in the neighborhood, so you know, I give a little cheer, a little money and you know-promote, the whole package.”

Corey and Susie Feldman, the power couple who star in the A&E hit show ‘The Two Coreys’, were genuinely excited to take part in the event. “We’re here to support the kids of course,” said Corey. Granted, Corey is no stranger to giving back big-time to the community while also promoting animal rights. He’s a spokesperson for PETA, Farm Sanctuary, The Humane Society, MoveOn, and Greenpeace, and was awarded the Paws of Fame Award by the Wildlife Way Station for his dedication to animal rights.

Inside the venue, the crowd was pumped up as girls took to the bull to raise cash for the kids. And it wasn’t just "babes’ who rode the bull, a few celebrities gave it a try. First to give it a shot was actress Jaimarie Bjorge, who remained in the saddle for the duration of the ride and got the crowd pumped up for the rest of the riders.

All in all, this was a great event for a great cause and no doubt, there are quite a few grateful children in Los Angeles today.