New Kids On The Block Auction Self-Portrait For Charity 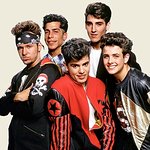 80’s boyband New Kids On The Block are back and once again exciting their fans with a new album and tour. And as if that’s not enough to whet the appetites of excitable young girls, then maybe this is: the band are auctioning a one-off self-portrait to raise money for charity.

The group have teamed up with the cancer charity No Surrender to auction the picture on eBay. The drawing – sketched backstage at their gig at the O2 Arena in London on January 24 – was created by band member Donnie Wahlberg, and is already attracting bids of over £1000. The pen the singer used to draw the portrait is also up for sale.

No Surrender is a web-based forum for young adult cancer sufferers that provides a place where they can find people of their own generation who understand exactly what they are going through. The Trust was set up by Jason Boas in 2007 who at only 33 was diagnosed with pancreatic cancer and has since raised an overwhelming £150,000 within the year. More information about No Surrender can be found here.

The NKOTB auction runs until February 4 and can be accessed here.