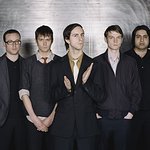 British bands are celebrating the approaching spring and summer by playing charity concerts in the UK.

To benefit cancer charity No Surrender, Maximo Park will play a gig at the Newcastle College Performance Academy tonight, March 24, and the band will also sign 250 vinyl copies of new song ‘Wraithlike’ for fans who donate a minimum of £3 to the charity.

No Surrender is a web-based forum for young adult cancer sufferers that provides a place where they can find people of their own generation who understand exactly what they are going through. The Trust was set up by Jason Boas – a friend of Maximo Park – in 2007, who at only 33 was diagnosed with pancreatic cancer and has since raised an overwhelming £150,000. He recently passed away, following organizing a charity auction that featured New Kids On The Block. More information about No Surrender can be found here.

Also planning charity concerts are bands such as Hot Chip, The Bluetones and Bombay Bicycle Club, who will play a series of ‘hidden gigs’ in London in support of homeless charity Crisis. A total of nine gigs will be held in May and June, in unusual venues throughout the capital.

“Whether they would like to admit it or not, most people have an image in their head of a ‘homeless person’, the old-fashioned and unhelpful figure of the down-and-out, who in fact is entirely unrepresentative of the majority of homeless people in the UK,” said Hot Chip’s Al Doyle. “These are the hidden homeless, who for a variety of often very complex reasons have no regular accommodation. We hope our gig for Crisis will raise awareness of their plight, and are very happy to help the cause.”

Details of the gigs will be withheld until the last minute to draw similarities to the situation faced by many homeless people on a daily basis regarding accommodation.