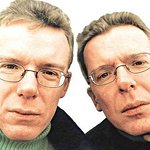 Scottish duo The Proclaimers – famous for tunes such as I’m Gonna Be (500 Miles) – are showing their support – in more ways than one – for a major charity event this weekend by appearing on a bra.

The duo – comprised of Chris and Charlie Reid – have had their caricatures drawn onto both cups of the bra by cartoonist Malky McCormick. The bra will then be auctioned at the Edinburgh Moonwalk tomorrow night.

“We could never say no to helping a charity like this,” said Chris. “Every family has been touched by cancer, so we were only happy to do something. Even though Malky has drawn us as caricatures we are flattered by out portrayal – we have seen the drawings he has done of other people!”

The Edinburgh Moonwalk is part of a series of walks being held around Britain to raise money for breast cancer research. Organized by a charity called Walk The Walk, the walks feature men and women walking wearing bras and has to date raised in excess of £48 million for vital breast cancer causes. Launched in 1996 and with a patron in the form of Prince Charles, the charity donates its proceeds to Breakthrough Breast Cancer and other organizations.

Tomorrow’s Edinburgh Moonwalk will see 10,000 people pound the streets of the Scottish capital in their decorated bras to raise money for the cause.

“It’s a shame we can’t do the walk,” said Charlie Reid. “I am very interested in doing it in the future – possibly next year.”

To find out more about the Moonwalks, visit the official Walk The Walk website.