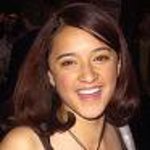 With evidence of the devastation of climate change so close to home, New Zealand actress Keisha Castle-Hughes is pressuring government for heavy emission reductions.

Just back from a trip to the Cook Islands with Greenpeace, Castle-Hughes was very moved and wants immediate action on climate change, reported Stuff.co.nz: “Here is a region contributing so little to the problem, yet bearing the brunt of it,” she said. “Our Pacific Island neighbours are suffering. I saw the real and devastating impacts of a changing climate: coral bleaching, homes battered by cyclones, erosion and food crops affected by rising sea levels… The locals were all extremely welcoming and happy to share their stories of how their daily lives have been impacted. It was a real eye-opener.”

Castle-Hughes is the latest big name to join Greenpeace’s Sign-On campaign, whose goal is for governments to reduce emissions by nearly half. It is hoped that meetings with Ministers and Representatives can garner agreement on emission targets before the Copenhagen meeting at the end of the year, where talks on the Kyoto Protocol’s sequel will take place. Other famous names include Lucy Lawless, Cliff Curtis, and the Flight of the Conchords' Rhys Darby.

“If I’m going to put my name to a campaign as I’ve done with the Greenpeace Sign On campaign, I want to do more than read brochures and fact sheets. I want to see first-hand what I’m fighting for,” said Castle-Hughes. “I haven’t come out of the trip with the knowledge of a scientist, nor have I come out with all the answers on how to solve climate change, but I do have a stronger passion than ever before to see New Zealand do its fair share in this global crisis,” reported Stuff.

“Seeing their beautiful land under threat, I felt ashamed for coming from a country that has failed to act on climate change and is still dragging its feet despite the growing urgency.”