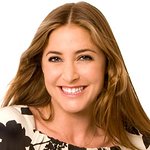 Model and TV and radio presenter Lisa Snowdon has completed her first parachute jump for charity – with the support of former boyfriend George Clooney.

Snowdon jumped from 13,000 feet to raise money for the Help A London Child scheme and the Shooting Star Hospice earlier this week. Last week, Look To The Stars revealed that George Clooney had donated $19,000 to the initiative.

“What a feeling,” said Snowdon. "When I got to the skydiving centre I was really nervous, it looked so high up. I don’t think I realized how high it was. My nerves were building when we went up in the plane and I felt really sick – it seemed to take forever to get up there. When we got up to 13,000ft the red light went on, then the yellow light which means it’s time to go and I freaked out.

“I had my legs dangling out of the plane and it felt so unnatural then suddenly we were out. We did this crazy back double somersault and I could see the bottom of the plane, it was the most surreal thing I’ve ever done. It happened so quickly I didn’t worry about the parachute. The freefalling was wild, it was just brilliant.”