Actors, musicians and athletes have designed and autographed one-of-a-kind “I Love. . .” t-shirts to be auctioned off to benefit Christina Applegate's foundation Right Action For Women.

The auction is in connection with Lee National Denim Day on October 2, one of the largest single day fundraisers for breast cancer in the country.

“I’m overwhelmed by so many familiar faces who have designed a t-shirt to help Right Action for Women which is all about getting high-risk women screened appropriately for breast cancer,” said Applegate. “I’ve been honored to be this year’s Lee National Denim Day ambassador and this t-shirt embodies the spirit and power of the campaign.”

Applegate is currently serving as ambassador for Lee National Denim Day which benefits the Women’s Cancer Programs of the Entertainment Industry Foundation (EIF). The campaign encourages people to wear their jeans on Friday, October 2, in exchange for a $5 donation to support crucial breast cancer research. Visit denimday.com to sign up.

“Christina is such a powerful leader in the fight against breast cancer, it’s no surprise her peers are standing up to show their support for her and the fight to end this disease once and for all,” said Liz Cahill, VP of Marketing and Communications for Lee Jeans. “We’re thrilled to see the positive response and hope to see Americans follow her lead by joining us for Denim Day this October 2.”

As part of the fundraising campaign, the limited edition “I love life” t-shirt is available for purchase on denimday.com. denimday.com/. Five dollars of every $19.99 purchase will benefit Right Action for Women.

Since its inception in 1996, Denim Day has raised more than $75 million to fight breast cancer. 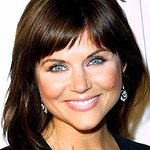 Award-winning actress and mother Tiffani Thiessen, best known for her role on the hit television series Saved by the Bell, is partnering with the National Meningitis Association (NMA) to launch a new public health initiative, It’s About Time: Help Stop the Clock on Meningitis, aimed at educating parents about the importance of potentially life-saving vaccination to help protect their pre-teens and teens against meningococcal meningitis. More →