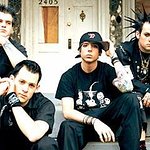 Good Charlotte rocker Joel Madden might be famous for his relationship with Nicole Richie, but underneath it all the musician has a heart of gold

“Every mouth you feed and every person you help is just as important as the big picture,” said Madden in a recent interview.

The co-founder of the Richie Madden Children's Foundation, who has a deep passion for doing ‘good’ in this world, has also honed in on the importance of follow-through in relation to charitable endeavors.

“How many times do you hear people talk about something and see it all the way through to fruition? It’s not often in LA,” says Madden. “Everyone loves to get together for meetings and talk about doing this or that. But the key is brick-by-brick, building something. Even if it’s a playground — do it! Phone call by phone call, dollar by dollar, our foundation gets things done physically,” Madden is referring to the Richie-Madden Children’s Foundation, which has just opened a brand-new playground at a Beyond Shelter Neighborhood Resource Center in South Central Los Angeles today.

The playground is just the tip of the philanthropic iceberg created by Madden and wife Richie, which began nearly three years ago during Richie’s first pregnancy. In part, Madden explains the how and why behind the creation of the Richie-Madden Foundation:

“We said we wanted to provide for mothers, and we had a baby shower — instead of having one for Nicole, we had it for mothers, and we got $250,000 in baby products to moms in LA. In their homes. Physically got to them,” Madden explains, “It’s become just a very big part of our life. It’s something that we do. Just like our jobs. It’s something that we expect of ourselves and of our family…the foundation is something really fun and important that we get to do together. And I think it’s important that our kids grow up around something. Some families have a family business, or a family store or whatever. We wanted to have something like that. We wanted to have a foundation that they’re responsible for, that they have to be a part of — that they’ll grow up with and it will just be something that they do, just like anything else that’s expected of them, because that’s what we do. That was the whole idea of it.”

Madden is also excited that the Richie-Madden Foundation is one of the recipients of the new 7-Eleven campaign. The company’s 7-Eleven Coffee Cup With A Cause campaign is introducing limited-edition 20-ounce coffee cups designed by celebrities and athletes to be sold nationwide. Proceeds from the cups sold benefit celebrities’ charities of choice with a guaranteed donation of $250,000, and a possibility of $300,000 per organization depending on how many of the cups are actually sold.

“It’s such an awesome thing for 7-Eleven to do, whether they were giving any money to our foundation or not,” Madden says. “In each month they’re doing a different charity, and it doesn’t get any better than that, man.”

Nancy Davis founded Cure Addiction Now (CAN) with her late son Jason who tragically passed away in February. More →