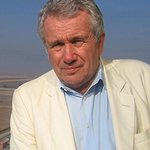 UNICEF UK Ambassador for Humanitarian Emergencies Martin Bell witnessed the horrifying impact of conflict on children when he visited northern Yemen recently. Fighting between government and rebel forces has raged in the region for several years, displacing thousands of families.

The former BBC journalist and parliamentarian – who has travelled to some of the world’s most difficult and dangerous places championing child rights – had access to many areas in Yemen, including camps for people displaced by the conflict.

On his six-day visit, Mr. Bell travelled almost 2,000 km to five governorates in order to see how UNICEF is supporting efforts by the government to improve children’s lives.

“The humanitarian crisis in Yemen is acute, even by the standards of other countries that I have visited in conflict or post-conflict situations,” he said. “I have been impressed by the work being done by UNICEF and its partner agencies, as well as by the Yemeni people themselves. But much more has to be done, especially to meet the needs of the children who are the country’s future.”

Mr. Bell pledged to raise awareness about the crisis facing these children when he returned to the United Kingdom. His reporting on Yemen for the ITV network was broadcast on 27 August, and a personal account of his trip was published in the Daily Mail’s ‘Live’ magazine this past Sunday.

Mr. Bell’s visit was “a critical opportunity to demonstrate the efforts being made by the government and development partners in addressing the basic needs of the children,” noted UNICEF Representative in Yemen Geert Cappelaere.

“My trip to Yemen has shown me that aid agencies like UNICEF are in the best position to assist children in emergencies,” said Mr. Bell, “because they don’t just fly in when the crisis strikes or media arrive. They work across the world, year in year out, supporting children in countries before, during and after humanitarian crises happen.”

Referring to the ongoing conflict in Yemen and the massive flood crisis now occurring in Pakistan, he concluded: “It is time for a concerted effort to help children in Yemen as well as in Pakistan. Both have suffered too much already.”