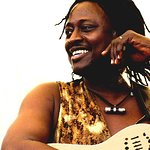 Internationally renowned musician Habib Koité has been named as the first-ever National Ambassador for UNICEF in Mali.

“Habib Koité is distinguished by his undisputed commitment, his interest and his generosity in the promotion of children’s rights, including the promotion of handwashing with soap as a simple gesture to save lives,” said UNICEF Representative in Mali Marcel Rudasingwa during Mr. Koité’s inauguration.

The internationally renowned musician has achieved many distinctions, including knighthood in the Order of Arts and Letters of France and the National Order of Mali, and an Ambassadorship to the Festivals in the Desert and the Niger. But for a man so devoted to the advancement of children’s rights, the position of UNICEF Ambassador is a special one.

Mr. Koité said that his goal as UNICEF Mali Ambassador was to be a source of inspiration for the nation’s children.

“I will serve as an example, and I will strive for continued improvement of their status,” he said. “I will be the messenger of their cause to the authorities and public opinion so that the behaviour changes needed are adopted.”

Born from a long line of traditional singers, or griots, Mr. Koité distinguishes himself as a rare breed of artist, committed equally to his craft and the advocacy of child rights worldwide.

This week, the East End Chapter/Jeanne Kaye League of New York City presented their Spirit of Life Award to raise critical funds and awareness for City of Hope, a world-renowned independent research and treatment center for cancer, diabetes and other life-threatening diseases. More →
More news →