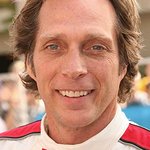 William Fichtner was the winner of Saturday’s 35th annual Toyota Pro/Celebrity Charity Race through the streets of Long Beach, California.

The race wasn’t without its high speed dramas, with Stephen Moyer flipping his car on Friday, and last year’s winner – Brian Austin Green – only managing to cross the line in eighth place. Other participants included Kevin Jonas and Djimon Hounsou.

On behalf of each celebrity racer, Toyota donates $5,000 to Racing for Kids every year and another $5,000 to the winning racer’s charity of choice. Racing for Kids, a national nonprofit program benefiting children’s hospitals throughout the country, (in this case, Miller Children’s Hospital in Long Beach and Children's Hospital of Orange County, Calif.), was created as a way to connect sick children with their favorite celebrities and race-car drivers. Toyota has donated more than $1.9 million to various children’s hospitals since 1991, on behalf of this race and its participants.