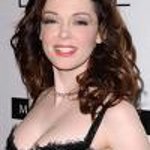 Actress Rose McGowan, perhaps best known for her roles on TV’s long-running, Charmed, and the 2011 motion picture, Conan the Barbarian, among others, is taking a lead role in a profound real life drama.

In 2009, she lost her father, artist Daniel McGowan, to Pulmonary Fibrosis (PF), an incurable lung disease that has no cure and no FDA-approved treatments, and which kills more than 40,000 Americans each year… as many as breast cancer. She’s now taking a lead role to build awareness to fight the disease and working with the Coalition for Pulmonary Fibrosis (CPF).

On Friday, December 16th, McGowan posted a message about her work with the CPF and the need for increased awareness for PF on her Facebook page.

As CPF’s Ambassador and Chair of The Daughters of PF campaign, a new program of the CPF, a 501C3 non-profit foundation, McGowan plans to help generate wide public awareness about PF, which has thus far been little known to the broad U.S. public. In so doing, she intends to use her celebrity to shine a spotlight on PF, much as other prominent individuals have done for diseases such as AIDS, breast cancer, Parkinson’s, and others.

For those stricken with PF, the lungs become scarred to the point that they can no longer make the necessary blood-oxygen exchange necessary to breathe and eventually causes patients to suffocate. Currently there is no PF treatment approved by the Federal Drug Administration (FDA) and there is no cure. McGowan, having witnessed personally the cruelty of the disease, has committed to taking a prominent role in the national effort to fight PF.

“Pulmonary Fibrosis is a horrible, horrible way to go. It makes me quite angry that not a lot of people know about it. I want to help change that,” said Rose McGowan. "My decision to help the CPF in their work to stop PF is my way of keeping my dad’s legacy alive and making a contribution to the world in his name. There are many causes that are better known, but watching the inexorable destruction that PF wreaks on the patient and their family and friends has convinced me of the urgency of this work. We are losing as many patients as breast cancer, but the investment in research for PF is minimal – it’s time for a change.

“I am now in the fight to stop this horrible disease because you can’t change anything by bemoaning your fate or sitting on the sidelines. After dealing with this tough loss, I have determined that my course needs to be one of helping to stop the disease – my loss can be turned into a win for all those diagnosed with PF in the future.

“None of us can effect change on our own, but as a united group we can use our numbers to build national awareness of this terrible disease, demand attention to it and help fund the day-to-day work needed to help all those affected. We need a very large team of people coming together to generate a more active national campaign against PF.”

“We are honored that Rose is taking on this cause and helping give patients and families a voice in fighting this horrible disease,” said Mishka Michon, CEO of the Coalition for Pulmonary Fibrosis. “Because she has been directly affected by PF through her father’s illness and death, she has a unique perspective and personally understands the plight of patients and their families. Her efforts will contribute to forever changing the landscape for this little known killer disease, and her celebrity, talent, and energy will serve to not only build needed awareness of the disease, but it will also help lead to developing successful treatments and eventually a cure.”

As the Chair of the Daughters of PF and an Ambassador for the CPF, McGowan will help raise public awareness of the disease by speaking out and doing media interviews, attending or hosting public events, and interacting with PF sufferers and their families, including via social media. The Daughters of PF program inspires daughters and other family members to turn their grief and pain into action by holding awareness and fundraising efforts in their local areas. To learn more about Daughters of PF, visit www.coalitionforpf.org.

McGowan starred as Paige Matthews in Charmed and starred in the movie Conan the Barbarian. She has the lead role as Mary Winkler in the upcoming made-for-TV movie, The Pastor’s Wife. She also stars in a new film, Rosewood Lane.

Actor and activist Rose McGowan will be joining Amber Tamblyn in speaking and appearing at GRLCVLT NYC’s ‘F*ck Rape Culture’ benefit show at Baby’s All Right in Brooklyn on August 1st. More →