Noting that the USA has never been modest about its achievements, actress Meryl Streep laments that there is no museum in the country’s capital that recognizes the contributions of the female half of the population through whose efforts, over the past 300 years, the status of American women has evolved.

The National Women’s History Museum (NWHM), currently administered from office space in nearby Alexandria, VA, says its mission is to fill the void of information about women’s contributions and accomplishments that “have been overlooked and consequently omitted from mainstream culture”.

“We at the National Women’s History Museum are determined that the stories of women will be chronicled,” says Streep, “and their achievements honored in monument and in our new museum on our nation’s Mall where our foremothers’ stories deserve to be.”

This, however, requires Congressional approval. Although the House passed a bill in 2009 to create the museum, the session ran out before the Senate vote. Legislation has since been reintroduced for the authority to purchase federal property adjacent to the National Mall, and so far the bill has passed the House Committee.

But there is another hurdle unrelated to government agencies. The NWHM estimates that they will need to raise over $150 million privately since taxpayer dollars will not underwrite any of the cost of the museum. Besides being spokesperson for the NWHM, Los Angeles Times reports that Streep has made her own financial donation to the museum project – of one million dollars.

Says Streep, “For all time, since what they call the ‘dawn of man’, the history of the human family has been written by one member of that family, and it was not Mom.” 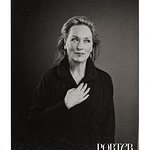 PORTER’s fourth annual Incredible Women list, published in the Winter issue with cover star Julianne Moore, celebrates the women who have empowered and inspired us this year. More →