Billy Idol And Heart To Perform At Charity Concert 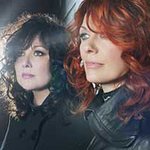 The benefit concert will honor Alice in Chains co-founder Jerry Cantrell and certified interventionist and Sony/ATV Music Publishing Senior Consultant Neil Lasher. Cantrell will be honored with the Stevie Ray Vaughan Award for his dedication and support of the MusiCares MAP Fund, and for his commitment to helping other addicts with the addiction and recovery process. Lasher will be the recipient of MusiCares’ From The Heart Award for his unconditional friendship and dedication to the mission and goals of the organization.

All proceeds will benefit the MusiCares MAP Fund, which provides members of the music community access to addiction recovery treatment regardless of their financial situation.