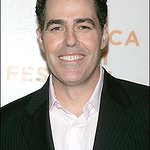 Comedian/actor Adam Carolla sped to the finish line in the 2012 Toyota/Pro Celebrity Race, triumphing over a field of film, television, music and sports stars in an exceptionally exciting and competitive event.

The roaring crowd witnessed a thrilling battle for first place in a tight field of drivers, with a late-race surge by actor Hill Harper that surprised drivers and fans alike. Scion drift driver and 2010 Formula Rookie of the Year Fredric Aasbo finished first in the Pro category.

Carolla, host of acclaimed comedy podcast “Adam Carolla Show,” co-creator of “The Man Show” and a contestant on the current season of “The Celebrity Apprentice,” made a daring maneuver when he passed the pole position starter, actor Kim Coates, as the two sped around a corner in the fourth lap. Carolla maintained his lead throughout the remainder of the race, despite the rally by Harper, who seemed to come out of nowhere as he challenged Carolla for the lead in the final laps. Carolla and Harper battled it out for victory, with Carolla finishing less than one second ahead of the “CSI: NY” actor. From his race start in the fourth row, Harper’s second-place finish was particularly impressive. In the pro category, Aasbo fought his way to a fourth-place finish overall, closing the 30-second delay of the professional drivers to end up just six seconds behind Carolla.

“In my past races, I finished third and ninth, so I expected to finish somewhere between 15th and 18th this time,” Carolla said. “But it’s a really amazing feeling to win. And I’m also thrilled to benefit the kids at the children’s hospitals—and also the parents, who are by their kids’ side around the clock. This win is for the parents!”

“This race was extremely competitive,” said Les Unger, national motorsports manager with Toyota Motor Sales, U.S.A. “Adam really pulled it out, but Hill Harper’s unexpected challenge in the final laps had the fans holding their breath. It’s not unusual for a celebrity to come in first overall, but for the celebrity drivers to compete neck-and-neck is exciting. These drivers were incredibly competitive, and the crowd was just thrilled. All their enthusiasm is, ultimately, for a great cause, and the Toyota Pro/Celebrity Race is proud to be able to make it happen.”

Aasbo spent the duration of the race battling to overcome the pros’ 30-second handicap, quickly weaving among the racers. Though he was unable to make it to the front of the field, Aasbo did score the best lap time of any driver, making the circuit in 1:47:107. Aasbo was happy to stand on the victory stage alongside Carolla and said, “I am so excited just to have been a part of the race, competing alongside all these great people. I feel like I have made a group of great friends here, and I am so grateful to Toyota for putting this all together to benefit the children’s hospitals.”

Toyota will donate $5,000 to Racing for Kids in the name of each celebrity racer and an additional $5,000 to Carolla’s charity of choice, Catholic Big Brothers and Big Sisters. Racing for Kids is a national nonprofit program benefiting children’s hospitals in Long Beach and Orange County, Calif. Toyota has donated more than $2 million on behalf of the race and its participants to various children’s hospitals since 1991.

Additionally, a $15,000 donation was made in conjunction with the annual People Pole Award. Sponsored by People magazine, the award was given to actor Kim Coates’ charity of choice, One Heart Source (in Africa).

The Toyota Pro/Celebrity Race is scheduled to be broadcast on the Speed Channel on Saturday, April 28, and will be re-air numerous times.