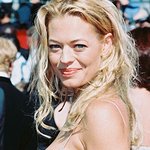 The enigmatic Jeri Ryan recently visited Australia for the first time to attend the “First Contact Convention” in Melbourne. Look To The Stars’ Shane Tyler Greaves sat down with Jeri during her Oz trek to discuss her life, her charitable contributions and of course the role that solidified her as part of Sci- fi royalty.

With a coffee in hand and smile to boot, Jeri was ready for her first Australian interview and looked genuinely thrilled to be in Australia and happy to discuss her many charity passions.

It became clear very early on in the interview that Jeri is a woman who is clearly confident, intelligent and has a strong opinion she is not afraid to express. Jeri, who is ever-present in the forefront of many charitable causes, is always careful to align herself with organizations and causes that resonate on a personal level.

“Charity work and giving has always been important to me, my mum was a social worker so I grew up amongst it and it’s always been apart of my life. I definitely try to stick to causes that are close to my heart and that I have a personal connection to – I think that’s really important.”

Supporting the high profile NOH8 campaign came naturally to Jeri. NOH8 was formed as a silent protest again Proposition 8 in California which amending the state constitution to prohibit same-sex marriage across the board. The photographs in the campaign feature people from all walks of life photographed with duct tape over the mouths and NOH8 painted on one check as a symbol of the countless voices being silenced by the proposed amendment.

Besides a killer photo, I asked why she was attracted to NOH8 and Jeri speaks of her innate soft spot for all GLBT (Gay, Lesbian, Bisexual and Transgender) organizations.

“I’ve always had so many gay friends and the fact that Prop 8 was started in California to prevent gay marriages is heartbreaking.” Clearly moved by the discussion and topic, Jeri is clear to define her reasons for supporting the cause as well as various other GLBT organizations.

“To begin with, when the divorce rates are so high in heterosexual marriages, to be talking about the sanctity of marriage and excluding an entire group of our population is ludicrous, it’s just ludicrous! These are people who love each other and are in committed relations and have every right to get married”

Growing up in the south Jeri understands the traditional attitudes toward general GLTB issues and marriage equality itself, however, despite her strong love for the south and while being a Christian herself, she is clear and unfaltering in her views.

“To put it simply, being gay is not a choice that anyone would make! No-one would choose to make their life more difficult knowing what the obstacles are. I am not going to buy into the notion that this is a personal choice or wrong in any way… This is the way that God made people and it’s time for total equality.”

When asked what she thinks it is that has made the GLBT audience connect with her on such a massive scale she says with a laugh “it was probably the outfit! Let’s face it, ‘Seven’ was just a little bit fabulous!”

Another charity that Jeri is proud to support is GLSEN. GLSEN is the Gay, Lesbian, Straight Education Network which plays a vital role in providing education and support for kids at school who may be affected by bullying. Primarily targeted at GLTB adolescents, the core mission of the organization is about educating and nurturing an understanding for school children whilst facilitating and cultivating the concept of equality and respect, regardless of your sexual preference. A key mission for the organization is to develop safer environments for today’s youth and provide them with support to grow their own identify without fear of repression.

“This again goes back to kids. GLSEN is such a great organization, they work closely with schools to create gay and straight student alliances to make the GLTB kids feel safe and let them know that there is a place they can go where they won’t be judged and have people they can talk to. Everyone gets teased on some level, people go through bullying in many different ways and GLSEN help to combat it at it’s core. They provide ‘Safe Space’ kits directly to the children and schools making all those in the school level of our society aware of resources and support”

In today’s world where young adults have so many pressures, worrying about being bullied as a result of your sexuality or personal identity is not a concept that Jeri is prepared to stand for: “Kids today are going through so much already, the whole idea of having extra pressure and fear based on their sexuality is devastating, this shouldn’t be happening in a civilized society and that’s why this particular cause is so important to me… as a mother I’m strongly apposed to any kind of bullying – in all forms. Bullying should not be tolerated at all, whether it is at school, work or at home. Developing educational programs for the younger generation is such an important mission and I’m proud to be able support them.”

When moving onto Jeri’s impressive professional body of work, we discuss the ever-changing entertainment industry. To have enjoyed a constant career whilst remaining relevant in a notoriously fickle industry is no short order. As a working mum, juggling a career with the role of both wife and mother is also an ongoing challenge but Jeri has found a way to make it work. “I’m now fortunate enough to be able to select roles that suit my lifestyle but it’s definitely something I’m very aware of. Coming off the back of Star Trek which was a really, really tough schedule, I worked all the time. My son is now 17 and my daughter is 4, back then I was working 16 hour days and now its really important for me to take more time out with my family and take roles where I am apart of an ensemble cast and wont have to be in every scene – its definitely a luxury that I’m very thankful for!”

There has been one re-occurring theme within many of the roles that Jeri has accepted over the years. They are all positive, powerful role models for young people. As the star of TV’s current hit show ‘Body Of Proof,’ Jeri plays chief medical examiner Dr. Kate Murphy and stars alongside an ensemble cast consisting of 2 female leads. Again, Jeri plays another intelligent, strong and self-assured woman.

Accepting these styles of roles are certainly a conscience decision for Jeri, “I’m always conscience of what young people are watching, I want there to be positive role models for girls and boys growing up. Everybody needs to see the whole spectrum of what humanity is and what people are and know that not all people are homogenous and they shouldn’t all be homogenous and they need to know that. They need to know you can’t judge people by the way they look, or the way they dress or the way they talk. Yes, I want to play a strong positive intelligent character, I want my children to see characters with substance and be something that they can look up to.”

After working on some of TV’s most popular shows including ‘Body Of Proof,’ ‘Law and order SVU,’ ‘Two and A Half Men,’ and ‘Boston Public’ to name a few Jeri is nostalgic when looking back at the role that immortalized her in Sci Fi history. As ‘Seven of Nine’ in Star Trek Voyager, Jeri played the much-loved Borg who classically re-discovered her humanity throughout the show. “I really enjoyed the dichotomy of Seven, how she looks a certain way and acts completely different. She looks overtly sexual but her personality is nothing like that. It was such a rich character as an actor to play, there was so much growth….she didn’t even start off human!”

As for what’s next – Jeri says that for now she is simply enjoying balancing her family, her career and her life. “I feel like I’m in a really great place, I have an amazing family that I adore, I love my work and I feel like I’ve achieved many of my professional goals… for now, I’m having fun. I’m just along for the ride.”

For such a caring and genuine person who supports so many charitable organizations with such conviction and pride, the phrase ‘Resistance is futile,’ rings true.