Celebrity supporters, elected officials, and notable AIDS activists addressed the crowd assembled in and around West Hollywood Park before the walkers set out on the route.The event also achieved strong fundraising results, which benefits AIDS Project Los Angeles (APLA) and 29 other important L.A. County AIDS service organizations. These groups provide urgently needed care to thousands of people living with HIV, as well as vital prevention work that reaches many more throughout the Southland.

“The 30,000 participants who took to the streets today can take pride in the incredible $2,912,209 raised to fight AIDS and lift up the lives of those affected by HIV,” said Craig R. Miller, Founder and Producer of the event. “Thanks to the thousands of dedicated people who walk and fundraise each year, we have made tremendous progress and we are facing a better day in the fight against AIDS,” Miller says. “But we have to remain strong in our response. We have to remain vigilant. And most of all we have to remain visible.”

Since its inception, AWLA has raised more than $75 million for APLA and a host of other HIV/AIDS service organizations throughout Los Angeles County.

“As we mark the 31styear of the epidemic in the United States, AIDS Walk Los Angeles remains a critical – and, in fact, the single largest – source of private support for those who rely on APLA’s services,” said Craig E. Thompson, Executive Director of AIDS Project Los Angeles. “With their incredible fundraising, AIDS Walk Los Angeles participants are changing lives, powering prevention efforts, and supporting advocacy work to defend the civil rights of all who live with this still-deadly disease.”

The event’s visibility was compromised this year when AIDS Walk Los Angeles’ fully paid ads were banned by the City of Santa Monica’s transit line, Big Blue Bus, along with all other advertisements and public service messages from charities. Only “commercial” advertising is allowed under the new policy. For the past six years, these advertisements have been a mainstay of the event’s organizing campaign. According to City officials, the ads generated no complaints.

AIDS Walk Los Angeles Founder and Producer Craig Miller blasted the ban by Santa Monica City Hall as both injurious to the fight against AIDS and an assault on Free Speech. “These bus ads are a key element in raising funds and awareness for AIDS Walk Los Angeles,” said Miller. “This censorship can only reduce our capacity to fight the epidemic, and will greatly disadvantage all community-driven organizations once served by Big Blue Bus.” 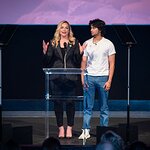 More than 150 people including American Red Cross Los Angeles Region volunteers, donors and community partners came together at the Red Cross Stories event at Paramount Pictures Studios in Hollywood last week for an evening of storytelling narrated by celebrities. More →