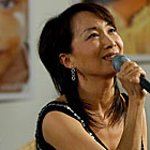 UNICEF Goodwill Ambassador for Japan, Agnes Chan, has ended a three-day mission to the occupied Palestinian territory where she witnessed the challenges faced by Palestinian children.

The trip by Dr. Chan – a pop singer, television personality and doctor of education – was aimed at giving her an understanding of the critical assistance UNICEF programmes provide to Palestinian children and women with financial support from donors including Japan.

Dr. Chan visited Hebron’s Old City. She also travelled to Khan Al Ahmar, a poor Bedouin community lacking basic infrastructure such as electricity or running water. She saw how Bedouin children and families in even the most isolated communities receive primary health care from mobile clinics supported by UNICEF and partners.

In the densely-populated enclave of Gaza – home to 1.6 million Palestinians, half of them children – Chan played with adolescents in a UNICEF-supported family centre supported by UNICEF. These safe recreational facilities bring children, if for just a few hours, a sense of normalcy.

She visited families and heard about their challenges in accessing clean drinking water; 90 per cent of water from the aquifer from which Gaza draws its water supplies has been deemed unfit for human consumption. Chan saw water tanks — installed by UNICEF with funding from Japan – that allow families to receive clean water despite daily power cuts.

“The situation in Gaza is very difficult for families,” Dr. Chan said. “The children I met opened my eyes to how resilient they can be in the face of hardship. I hope they will be allowed to fulfil their dreams and that both Israeli and Palestinian children will be able to live in peace someday.”

Chan concluded her visit with a concert commemorating the 23rd anniversary of the Convention on the Rights of the Child in the presence of Palestinian Authority Prime Minister Salam Fayyad and the Japan representative to the Palestinian Authority. She performed in both Japanese and in Arabic in front of a packed Ramallah Concert Hall with children from the Edward Said National Conservatory of Music.

Dr. Chan has a Ph.D. in education from Stanford University and is the author of more than 70 books. Her first song was released when she was 14 years old. She has been a UNICEF Goodwill Ambassador since 1998.