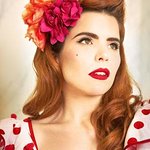 The sale is in aid of abused women in the Democratic Republic of Congo, in tandem with Oxfam’s Get Together for International Women’s Day on 8 March 2013, and will be held at east London’s Bethnal Green Working Men’s Club.

There’ll be a pop-up retro hair salon from Lipstick & Curls to give you instant Victory rolls, a stylists’ corner and photobooth featuring some surprises familiar faces, hyper ping-pong action from the mighty Pongathon crew, food from Gizzi Erskine, tea and cakes from Joe’s Tea Co and Drink, Shop & Do and DJs including Gizzi, Jen Long (Radio 1), My Ex Boyfriend’s Records and more all day long.

Rumble in the Jumble #2 is the follow-up to Radio 1’s Gemma Cairney and TV presenter Dawn Porter’s hugely successful event last year for Get Together, which raised an enormous £7k for Oxfam.

The Music Circle has been busy blagging choice jumble from the music world and there’ll be plenty of clothes, accessories and bric-a-brac to snap up on the day, including donations from Schuh, ASOS, Pretty Polly and Marshall Amps. There’s room for the boys too, with donations from Tinie Tempah, The Vaccines, Wretch 32, Toddla T, Foals, Miles Kane, Russell Tovey, Benga and even Marilyn Manson, including a record stall assembled from DJs and bands’ personal collections.

All you need to do is turn up on the day with a bag of decent jumble to donate, pay £3 to get in, and get stuck into the rest!

The Music Circle is a subsidiary of Annie Lennox's The Circle. Set up in 2008 by Annie Lennox and Oxfam, The Circle is a partnership of influential women who work with Oxfam, bringing ideas, skills and resources to the table to help Oxfam fight poverty and inequality. To date, The Circle has raised almost a million pounds for Oxfam to date.

To find out more, visit the event’s Facebook page.