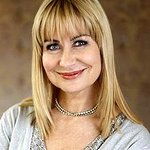 Sian Lloyd is a Welsh television presenter, best known as an ITV Weather presenter. She is an ambassador for Action for Children.

“I try and do a charity trek every year. A gang of my friends and I get together and choose an annual trek. We love the bonding thing, as well as the thought that we’re helping out. So far we’ve done the Great Wall Of China, The Tour de Mont Blanc, The Himalayas, The Three Italian Volcanoes and most recently Kilimanjaro, with 15 past Welsh rugby captains, for Lung Cancer Research. The Kili trek was televised in three parts by ITV1.

“I’m a vice-president of Action for Children and a patron of the Cardiff children’s hospice Ty Hafan. I’m also an Ambassador for Angels Against Addiction and the Prince's Trust.

“In 2007, I won the highly coveted Rear of the Year award! It’s funny, but there’s a serious point there too, because it promotes bowel cancer. It’s a disease that people don’t like talking about, so it’s important to raise awareness. I remain the oldest girlie to have ever won Rear of the Year.

“I enjoy doing charity work and was bowled over when I was up for the Third Sector Charity Supporter of the Year award in 2009. Duncan Bannatyne won it. I think about it every time I see him on TV ! But seriously, working with charities reminds you how many nice people there are out there. In my media world, people can be fairly go-getting, and it’s good to spend time with charities and see what a fighting spirit they and their beneficiaries have."

Sian also supports Parkinson's UK, the Cystic Fibrosis Trust, and is an ambassador for Velindre, Tenovus, Sick Children’s Trust and the Stroke Association.

Sian Lloyd has supported the following charities listed on this site:

Activity
Social reach
Google trends for "Sian Lloyd"
Available to Insiders only
Get Insider Access to these insights & more...

You can contact Sian Lloyd using details from this service. (Or read our advice on how to contact celebrities)

Sian Lloyd Wants You To Cycle For Neglected And Vulnerable Children Feb 7, 2013

We don't have any videos related to Sian Lloyd.