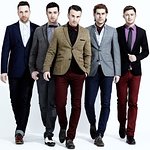 In a world in which everything is heavily analysed and over-thought, it’s refreshing to see that The Overtones have reached the top of their game with their deceptively straightforward approach to music. No gimmicks. No courting controversy. Just five immensely charming characters who combine their immaculate voices to deliver a harmonious catalogue of gorgeous songs.

What’s more, audiences don’t just agree – they wholeheartedly embrace the quintet’s approach to songs full of captivating choruses that brim with an entire spectrum of emotions. Their two hit albums, 2010’s ‘Good Ol’ Fashioned Love’ (#4) and last year’s ‘Higher’ (#5), have sold over 600,000 copies as fans the world over have fallen in love with them. Their third album ‘Saturday Night At The Movies’ released 2 weeks ago, debuted at in the charts at #5.

Along the way they’ve enjoyed a succession of major achievements, including performing in front of 250,000 people at the Queen’s Diamond Jubilee Concert, appearing at the Festival of Remembrance and hitting London’s Hyde Park for major festival shows at BT London Live (2012) and British Summer Time (2013).

Their own shows have been similarly successful, they have sold out 3 UK tours and they are looking forward to their next tour which commences in February and concludes a month later with two London shows at the IndigO2. “It’s quite astonishing to go on tour and to play to so many people each night. It’s incredible because they’re here to see us and they’ve committed their time and money to come out to support us and enjoy their night. It genuinely blows my mind,” says Mike. “And getting to go back to our home towns on tour is always a real highlight,” adds Mark. “Seeing your family and friends in the audience really makes us appreciate how far we’ve come.”

Already, The Overtones’ music has taken them on an international voyage covering mainland Europe, Scandinavia, America, South Africa and beyond. Fan-clubs have also emerged in unchartered territories too, such as Brazil, Japan and Indonesia. Where could Saturday Night At The Movies take them? “It’s easy to say that music is universal but we’ve experienced it first-hand,” states Mike. “The one thing that’s universally true is that people are up for a good time and want to forget their troubles.”

With Saturday Night At The Movies, The Overtones’ journey will surely continue into a glorious Technicolor future.

The Overtones has supported the following charities listed on this site:

Activity
Social reach
Google trends for "The Overtones"
Available to Insiders only
Get Insider Access to these insights & more...

You can contact The Overtones using details from this service. (Or read our advice on how to contact celebrities) 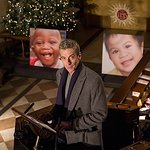 We don't have any videos related to The Overtones.