Singer Alicia Keys hosted a gala in London last week to raise cash for orphans suffering from HIV/AIDS in Africa, and attracted some of the biggest names in showbiz.

The lavish ball – held last Thursday – raised money for Keep A Child Alive, the charity Keys co-founded to provide life-saving anti-retroviral treatment to children and their families with HIV/AIDS in Africa. Guests such as Kelly Rowland, Mischa Barton, Russell Brand, and Jennifer Hudson each paid over $2,000 to be part of the ball.

“Any time you’re helping someone is very important and, of course, when children are involved,” said Hudson. “I feel like your celebrity is not about the fortune or the fame. But if you can’t help anyone then it’s in vain, it’s pointless.”

27-year-old Alicia Keys, who stunned the audience by performing a duet of the Eurythmics’ Sweet Dreams and REM’s Everybody Hurts with Annie Lennox at the gala, helped found Keep A Child Alive after visiting South Africa in 2003 and witnessing the effects of the AIDS pandemic firsthand. She told BBC Newsbeat that people need to remember that AIDS is a global problem.

“It scares me… it really does. Thinking of myself, thinking of younger generations, my brother’s generation. We have a lot to really be careful about and it’s such a major thing that we have to be cautious. But we can totally avoid it by practicing safe sex and, if you can, just abstinence. And definitely being aware of what’s going on so that you know that you want to protect yourself every time, all the time.” 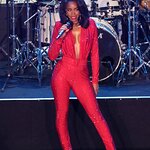