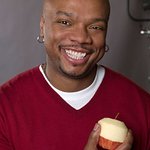 Viewers of the The Next Food Network Star watched Aaron McCargo go from struggling in front of the camera to dazzling the audience alongside Rachael Ray and a little Girl Scout.

The husband and father of three kids admits working with a child gave him a little piece of home in the kitchen. Last week he was dubbed the winner of the series, and his new show Big Daddy’s House has just begun airing on the Food Network. As for his road to success, it is one that is paved with the help of mentors. It is McCargo’s hope that his new show will be a platform to make a difference in the lives of teenagers. He is already getting bombarded with calls from kids who are interested in culinary arts but may not be on the right side of tracks. McCargo says his focus is being able to reach out to the young kids.

Look To The Stars talked with McCargo about his win, cooking, and the role which mentorship played in his life.

How exciting is it to be the Next Food Network Star?

It’s very exciting. It is one step closer to my dream to make an impact on the world by my food and a big personality.

How did you come to trying out for the show?

My wife said I was always cooking and always talking. She thought it would be a great stage for me to be in the Next Food Network Star Competition.

You’ve been cooking since a very young age. How did the passion develop?

Since age seven or eight I was always cooking – even microwavable dishes for my parents. One summer came when I was thirteen, my mom was like “what do you want to do this summer?” I told her I want to cook. She said, “Well, you might as well work in the hospital and be a candy striper.” I thought she was kidding but sure enough I became a candy striper, then found my way to the kitchen and fell in love.

There is an episode coming up called Mentor Madness. Who is the episode inspired by?

When I first got to the hospital, I bumped into a gentlemen called Clem. He said to me, " I noticed that you like hanging around…Do you want to be a chef?" And I said, “Yes, that is my dream.” He took me under his wing, showed me how to make soup and sauces. He became a mentor to me, and there are a couple of other people who have crossed my path during my life that really had an impact. They really pushed me to continue with my cooking and pursue my dream to become a great chef. The episode will reflect my relationships, so each meal on that show will be something that applies to that person in one way or another. I really want to do an inner city type of thing and let people know that – whether it be the Bronx, Compton, Camden or New Jersey – there is a lot of talent… I would like to direct them at a young age to become great chefs.

Your show was great. Although you are a professionally trained chef, you also have a look about you, a way about you that makes people think, “Hey, I can do this.” You make everything look so easy and fun, especially when you are in the kitchen with your children. Is there something that you want to impart to parents?

There are a lot of kids who want to spend time with their parents, and sometimes parents don’t have time to go play in the park – but there is always the kitchen. My whole thing is to show you something that I know you can do.

Thanks for your time, Aaron.