Danny Cipriani Bares His Skin to Help Animals Keep Theirs 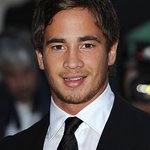 The Sale Sharks’ Danny Cipriani is the star of a brand-new ad campaign for PETA in which he shows off his tattoos – and his chiselled physique – next to the words “Ink, Not Mink”.

The ad goes on to say, “Fur looks good only on its original owner. Be comfortable in your own skin, and let animals keep theirs”. The new ad, available here, was shot by top celebrity photographer Trevor Leighton.

“The rugby pitch is known for being a tough environment, but it’s nothing compared to what some animals go through when being hunted for their fur”, Cipriani says. “I’m proud to be helping PETA raise awareness of how to help these animals – all you have to do is not wear them!”

In the wild, animals caught in cruel steel-jaw traps can languish for days, slowly dying from hunger, thirst, disease, blood loss and predation. Some, especially mothers with babies, chew through their limbs in a desperate attempt to escape. Animals on fur farms spend their entire lives confined to cramped, filthy cages before they are beaten, gassed or anally electrocuted. Sometimes, they are even skinned while still alive. More than 2 million cats and dogs are skinned in China every year – many while still conscious. Designers such as Ralph Lauren, Stella McCartney, Tommy Hilfiger, Calvin Klein and Vivienne Westwood have all publicly sworn off fur. With so many stylish alternatives available, there’s no excuse to harm a hair on an animal’s head.

For more information or to view the ad, please visit PETA.org.uk.