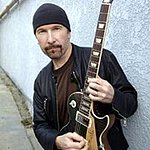 U2 guitarist The Edge and producer Bob Ezrin, who has worked with the likes of Pink Floyd and The Darkness, have teamed up to help musicians affected by Hurricane Katrina.

Together with Gibson Guitars, the Guitar Center and charity MusiCares, the pair formed Music Rising in November 2005. The new charity’s primary goal is to replace every instrument lost to professional musicians in the Gulf Coast.

“New Orleans is a crucible for great music,” says the Edge. “The idea that it would be just a place of history for music is awful to me. Coming from Dublin in the Seventies, when music was something you had to search out, I’d never dreamt that somewhere like New Orleans could exist. Music was coming out of the walls. It seemed not just a form of escapism, but like it was weaved into everybody’s life.”

Bob Ezrin describes how he and The Edge were deeply affected by the disaster in New Orleans; “We both concluded instantly that the human disaster was indescribable, but what was being wiped out at the same time was the culture of the entire region.”

Gibson Guitars CEO Henry Juszkiewicz and Guitar Center CEO Marty Albertson contacted Ezrin and The Edge. They created a custom limited edition Gibson Les Paul guitar to raise money for flood victims. The founders pledged a minimum of $1 million for the sale of the guitar and to cover the design and manufacturing costs.

The original guitars sold out quickly at auction and Gibson are now planning a larger edition of a more affordable Music Rising Epiphone Casino to mark the charity’s one year anniversary. The original Casino model was used by John Lennon and George Harrison in The Beatles’ early years, and subsequently by Noel Gallagher of Oasis, and The Edge himself.

To date, Music Rising has provided more than 2,100 replacement instruments to professional musicians, donating over $2.1 million and winning coveted charity awards. The charity plans to extend its instrument replacement program to include local churches, marching bands and schools.

The Edge says, “Something should be done and not just because New Orleans deserves it, but because the world needs New Orleans.”