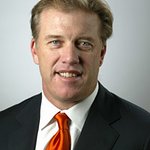 John Elway, Pro Hall of Fame Quarterback, and his wife Paige were recently honored at the Carousal Ball for being incredible ambassadors in the Denver community.

In addition to diabetes, they support the Boys and Girls Club, dog related causes, and more. The Elways have helped raise millions of dollars for charities and are a true inspiration.

Other celebrities who graciously donated their time to entertain the attendees were David Foster (Master of Ceremonies and Music Director), Usher, and Ruben Studdard. At one point in the evening, Mr. Foster stepped off the stage and into the crowd randomly seeking top singing talent. Three surprised guests, including one child, were given a microphone and the opportunity to share a song of their choosing with the crowd. The attendees loved this spontaneous moment and cheered for those in the spotlight.

The event raised hundreds of thousands of dollars to benefit the Barbara Davis Center for Childhood Diabetes. The Center currently cares and provides programs for children and adults worldwide with diabetes. In addition, two core laboratories bring together scientists worldwide to perform studies on cure and prevention. Read more information here.

The silent and live auctions were generously supported by many sponsors. The top bid of the evening was for two tickets to the upcoming Broncos versus Ravens game in Baltimore. The prize included transportation – flying on the team jet with the Broncos. The first winner surprised everyone by donating the prize back to the auction so more money could be raised for diabetes. By the end of the night, thousands of dollars were eagerly donated by the attendees.

Over 1.2 million people suffer from Type 1 Diabetes, the most severe type which is also known as childhood, juvenile, or insulin-dependent diabetes. Currently, there is no cure. Each child diagnosed will have the disease for the rest of his life. Fortunately, many people are committed to raising money for care, research, and eventually finding a cure for this autoimmune disease.

Several children with diabetes from the Barbara Davis Center were at the event as participants and auction volunteers. Many of them wore exterior insulin pumps somewhere on their bodies to manage insulin levels. Nancy Gaines, CEO of Gain Advantages, Inc., had the opportunity to talk with one young volunteer named Parker. “I was so impressed by him. He clearly understood his disease, yet he was so brave and truly wanted to support the event. I am pleased to learn the artificial pancreas may soon be the answer to diabetes so kids won’t need pumps and tubes.”

Besides the Carousal Ball, October 2 is special to diabetes in another way. Colorado Governor John Hickenlooper just signed a document to proclaim October 2 as Childhood Diabetes Awareness Day. With over 30 million Americans living with diabetes, this proclamation is a great way to encourage awareness and treatment of the disease – and hopefully discover a cure one day.