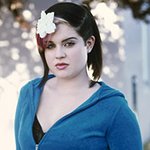 This week, Kelly Osbourne – who credits a vegan diet as the secret behind her weight loss transformation –– announced she’ll be hosting Mercy For Animals' annual Hidden Heroes Gala in Los Angeles this September.

The event will take place on September 15 at Vibiana in Los Angeles.

The event honors investigators who go undercover inside the nation’s largest factory farms and slaughterhouses to expose animal abuse.

Mercy For Animals has conducted more than 60 undercover investigations, which have shed a bright light on the dark world of factory farming, resulting in: