ADAPT Community Network is the largest provider of preschool education for children with disabilities in New York. The annual event, which attracts VIP guests from fashion, film, and television, raised over $104,000.

Jill Flint hosted the event. Best known for her starring roles as Dr. Jordan Alexander on NBC’s medical drama, The Night Shift, and as Jill Casey on four seasons of USA’s hit show, Royal Pains, she has also had notable recurring arcs in Amblin Entertainment’s Bull for CBS, Robert and Michelle King’s The Good Wife for CBS, and, more recently, Imagine Television’s Wu-Tang: An American Saga for Hulu. 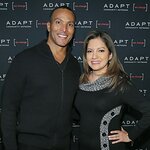