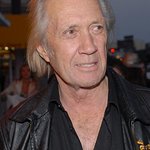 David Carradine, star of the television show Kung Fu and a plethora of films, passed away on June 3rd, 2009, aged 72 years old.

A funeral service took place on Saturday June 13 for the beloved late celebrity. Many other stars came out to show their respect for a man who made a name for himself doling out words of wisdom as Kwai Chang Caine on the television series Kung Fu. Among the celebrities in attendance were Jane Seymour, Rob Schneider, Lucy Liu, Tom Selleck, Daryl Hannah and many others.

The sky was gloomy as the white hearse which carried David Carradine’s body delivered the actor to his final resting place.

Carradine was known for his work on television, in movies and also for his support in all aspects of art and entertainment. He was a friend and patron to Food 4 Africa, a charity organization that seeks to give children one vitamin and mineral enriched meal a day while also teaching their caregivers about the importance of nutrition. Donations to the charity can be made here.

The circumstances surrounding his death are still being investigated.

Mr. Carradine will be missed by many because he was a star off stage as well as on. We here at Look to the Stars send the family of David Carradine our deepest sympathies and condolences during their time of bereavement.