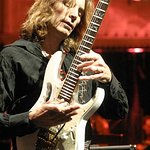 Guitar legend Steve Vai will hold a special charity screening of his new film, Steve Vai Live In Minneapolis: Where The Wild Things Are, followed by a charity auction in Hollywood next week.

Proceeds from the event will benefit Hollywood Arts, an arts academy that provides creative and commercial art instruction to homeless and at-risk youth. The guitarist has been a member of the board of directors since 2007.

A selection of rockers such as Slash, Ozzy Osbourne, Niko McBrain (Iron Maiden), Red Hot Chili Peppers, Tom Morello (Rage Against the Machine) and many others have donated signed items for a silent auction that will be held on the night, and there will also be an eBay auction. Items can be viewed here.

“I’m thrilled to be sponsoring this event in support of such a vital organization as Hollywood Arts”, said Vai. “I have personally seen how this institute has mended broken spirits and changed the quality of people’s lives while cultivating them to become valuable contributors in building a healthier society.”

The event – which will also feature Steve Vai talking about the new concert film – will take place at the Egyptian Theatre in Hollywood on September 15. Tickets range from $25 to $199 and are available here.