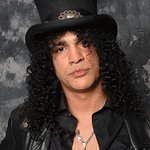 London-born musician, Slash, gained world-wide recognition as the lead guitarist of rock group, ‘Guns N Roses’ in the late 1980s to early 1990s. Whilst in the band, he created the side-group ’Slash’s Snakepit’ which although did not gain much mainstream attention, received critical acclaim.

He then co-founded the rock super-group ‘Velvet Revolver’ which re-established him as a mainstream artist in the mid to late 2000s.
In 2010, Slash released his debut album ‘Slash’, which rose to #3 in the US Album Chart following its release in April 2010. The album featured many of Slash’s musical friends, such as Ozzy Osbourne, Fergie of The Black Eyed Peas, Chris Cornell of Soundgarden, Adam Levine of Maroon 5, Lemmy Kilmister of Motörhead, Dave Grohl of the Foo Fighters, and Iggy Pop.

Slash recently became an honourary board member of Little Kids Rock as well as has playing many benefit concerts over the years, including the “Children Of The Night” show in LA in 1990 to raise money for housing for the underprivileged.

In 2007, he donated a pair of his leather pants to an auction to raise money for an endangered species of seal.

Slash has supported the following charities listed on this site:

Google trends for "Slash"
Available to Insiders only
Get Insider Access to these insights & more...

You can contact Slash using details from this service. (Or read our advice on how to contact celebrities)

Ohyay, a virtual event platform, has partnered with the charity Music Rising to launch a first-of-its-kind guitar viewing gallery in anticipation of “Guitar Icons: A Musical Instrument Auction to Benefit Music Rising” on December 11th. More →
More news about Slash →

Slash and Perla on Prop 8