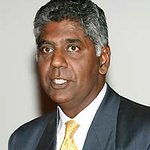 Former tennis star Vijay Amritraj is not only devoted to calling attention to the plight of those in need in India, he also backs up his devotion to these needs by hosting two charity events back to back.

The day of efforts to raise money included raffles, silent and live auction items. Among the silent auction items included tickets donated by the Tiger Woods Foundation to the Masters champion play.

The next evening Vijay hosted a Gala Banquet at the Beverly Hilton. Chuck Norris was honored at the gala for his work with children. One of the evening’s hosts was Parminder Nagra of Bend It Like Beckham fame and the tv series ER. Parminder looked absolutely stunning in her pink Sari. Many of the Celeb Golfers returned for round 2 of the charity oriented weekend. Tom Hallick conducted the live auction. Briefcase #18 model A.K.A Marisa Petroro modeled beautiful jewelry during the live auction. However, the biggest live auction prize of the night was comprised of roundtrip airfare to London, the two tickets to join Vijay at Wimbledon and then join him for dinner. This prize went for $30,000.

Determined to generate the most money he could for the foundation, Vijay offered to the same opportunity to the bidder who would match $30,000. Much to his pleasure, someone did make a matching bid.

Vijays says, “Since my appointment as UN ambassodor of Peace, I have seen the first-hand magnitude of a plight that exists all around us. The more I saw, the more it became obvious to me that something had to be done…” The Vijay Amritraj Foundation helps with a multiple causes in India which include helping those with HIV/AIDS, education of women, children and the blind. To learn more, go to www.vijayamritrajfoundation.org.