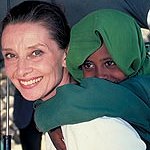 Audrey Hepburn has beaten modern celebrities, including Cheryl Cole and Kate Moss, to be named most stylish woman in a new poll by Oxfam.

According to the research, a quarter of UK women chose the 1950s star, immortalised in Breakfast at Tiffany’s, as their number one style icon, with Princess Diana in second place (14%) and Cheryl Cole in third (12%). In fact, seven of the top ten were stars from previous fashion eras, including designer Coco Chanel (5%), 1960s trendsetter Twiggy (5%) and blonde bombshell Marilyn Monroe (4%). Kate Moss, often listed as one of the most fashionable women on the planet, was in tenth place with just one per cent of the vote.

Oxfam carried out the research to understand the growing demand for vintage fashion from its UK shops and website: since the launch in April 2010, the Oxfam online vintage section has seen a 34% increase in sales and an average of 6,000 visitors per week. A third of the women questioned in the poll (33%) admitted they would choose a vintage item over something new. Half of those (50%) said it was because the item would be unique and they would be less likely to see anyone else wearing the same thing, one in five (20%) said they thought that the quality of vintage items is better than new, while five per cent felt inspired by celebrities wearing vintage.

Loyalty and regional style also seems to have an effect on Brits’ favourite fashion looks, with Newcastle’s Cheryl Cole scoring nearly three times as many votes in the north-east compared to London (19% compared to 7%).

“Like many designers, I spent countless hours in my early years taking inspiration from the clothes I found in second-hand shops,” said Wayne Hemingway, designer and founder of The Vintage Festival (taking place at Southbank Centre, 29-31 July 2011). “Now many people want to capture some of the glamour and timeless individual style of icons from previous decades, such as Twiggy or Jackie O, and genuine vintage clothing is the ideal way to do that.”

A quarter of Brits have bought vintage in the past, with 14 per cent of those saying they are buying even more now than they did three years ago. They cited the recession, availability and the fact that vintage is now more fashionable as reasons for the boost in their second-hand shopping habits. But it’s young people who are increasingly looking to items from previous eras to create their look, with 15 per cent of 18-24 year olds buying more vintage than before and two in five (41%) saying they would choose it over high street clothing.

“We are seeing a real resurgence in the popularity of vintage fashion, particularly since the economic downturn when people want their money to go further and buy them an individual look without breaking the bank,” said Sarah Farquhar, Oxfam’s head of retail. “Demand for quality vintage pieces is now so high that we launched the UK’s first online vintage charity shop, allowing shoppers to browse the best Oxfam items from around the country at any one time.”

As a well-known face of vintage fashion for more than 60 years, Oxfam will be present at the second edition of Vintage Festival, the brainchild of designers Wayne and Gerardine Hemingway, Vintage at Southbank Centre from 29-31 July 2011. After last year’s success, the festival is on its way to become an annual music and fashion led celebration of creative British cool.

Oxfam will be recreating the first ever Oxfam Shop on the Vintage High Street, selling a wide selection of hand-picked vintage items donated to shops across the country. Throughout the weekend Oxfam is calling for people to come to the shop wearing their best charity shop style to have a chance of being selected ‘Best in Show’ for the Oxfam catwalk show at 5.30pm on Friday and Saturday.

Visit www.vintagebyhemingway.co.uk for tickets and information. For those that can’t make the festival, Oxfam’s online vintage charity shop offers the luxury of browsing for one-off finds from the comfort of home. Visit Oxfam vintage at www.oxfam.org.uk/vintage.