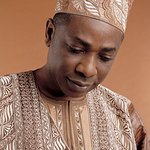 UNICEF said today that legendary giant of world music Youssou N'Dour had temporarily stepped down from his role as a Goodwill Ambassador for the organization because he is currently campaigning for the presidency of Senegal.

According to UNICEF policy, politicians or those seeking public office cannot serve as Goodwill Ambassadors for the organization.

UNICEF greatly benefited from Mr. N’Dour’s involvement, most recently when he met children in the Dadaab refugee camps in northeastern Kenya in September 2011, hearing for himself some of the many stories of suffering amongst the more than 435,000 people who have fled to the camps to escape famine, drought and insecurity in Somalia.

UNICEF thanks him for his over 20 years of service in making a real difference in children’s lives around the world.

N’Dour was appointed UNICEF Goodwill Ambassador on 3 April 1991. “I want to use my voice to break the silence of suffering children,” he said following his appointment.

He provided invaluable support to UNICEF’s efforts, especially in Africa, where prior to becoming a Goodwill Ambassador he helped promote an immunization campaign in Senegal. That same year, he attended the first symposium of the organization African Artists and Intellectuals for Child Survival and Development, set up by UNICEF.
As a long time anti-malaria activist, he created Senegal Surround Sound, an innovative initiative that combines the influence and power of the entertainment industry, media, marketing and political assets to reach individuals and communities with malaria education and activities.