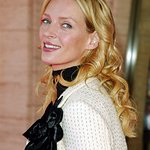 A role in the next film made by Uma Thurman, a Damien Hirst painting, a Fiat 500 decorated by the artist Tracey Emin, and a private jet tour of the Château Cheval Blanc and Château d’Yquem wineries were all up for auction on Wednesday night to raise money for ARK.

The event was the annual ARK Charity Dinner, and was held at the Old Royal Naval College in Greenwich, London. A host of celebrities attended the function, including Sarah Ferguson, Jemima Khan, Elizabeth Hurley, and Simon Cowell, each paying up to $98,000 for a table of 10.

The 1,000 attendees were entertained by a special performance by Stevie Wonder and a speech from former British Prime Minister Tony Blair. Over £25.5 million ($50.23 million) was raised this year, coming close to meeting the success of last year’s £26.6 million ($53 million) event. A downwards trend is currently being seen across the board – the Robin Hood Foundation in New York raised $56.5 million for charity in an evening last week, $15 million less than a year earlier.

ARK, or Absolute Return for Kids, is an international charity whose purpose is to transform children’s lives. Founded in 2002 by a group of senior figures in the alternative investment industry, the organization works to pool the skills and resources of the industry to improve the life chances of children.

Stevie Wonder appeals for finalization of books for blind treaty