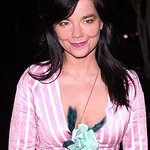 Bjork is an Icelandic musician.

Björk began work on a new project entitled Army of Mixes to help raise money for a relief fund after the tsunami which struck Southeast Asia in late 2004. The project recruited fans and musicians from around the world to either cover or remix the 1995 track, “Army of Me”. From over 600 responses, Björk and her co-writer Graham Massey picked the best twenty to appear on an album. By January 2006, the album had raised around £250,000 to help UNICEF's work in the south east Asian region.

I February 2006, Bjork visited Banda Aceh to get a first-hand overview of UNICEF’s work with children affected by the tsunami.

On 2 July 2005, Björk took part in the historic Live 8 series of concerts, headlining the Japan show.

In 2004 Björk took part in the “Hætta” concert in Reykjavík, organised in protest against the building of Alcoa aluminium smelters in the country, which would make Iceland the biggest smelter in Europe.

She founded the organization “Náttúra” which aims to promote Icelandic nature and grassroots industries.

On October 28, 2008, Björk wrote an article for The Times discussing the state of the Icelandic economy, and her thoughts on the proposed use of natural resources to get the country out of debt.

Björk, in collaboration with Audur Capital, set up a venture capital fund titled “BJÖRK” to support the creation of sustainable industries in Iceland.

On May 21, 2010, she wrote an open letter in the newspaper Reykjavík Grapevine, calling on the Icelandic government to “do everything in its power to revoke the contracts with Magma Energy”, the Canadian company who now has complete ownership of Icelandic geothermal company HS Orka.

Bjork has supported the following charities listed on this site:

Activity
Social reach
Google trends for "Bjork"
Available to Insiders only
Get Insider Access to these insights & more...

You can contact Bjork using details from this service. (Or read our advice on how to contact celebrities)

In a year when the world is coming together to support a new set of global goals – the most comprehensive attempt in history to fight poverty and create prosperity while protecting people and the planet – Pharrell Williams is partnering with the United Nations Foundation, with support from Google, to move people to take action on the United Nations’ International Day of Happiness on Friday, March 20, with an emphasis on reaching out to young people and engaging them on the issue of climate change. More →

We don't have any videos related to Bjork.