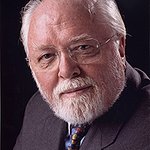 “To save the life of a child and to give that child a future is the greatest achievement of all. UNICEF makes a positive contribution to the wellbeing of millions of children worldwide and we who serve this humanitarian cause are privileged indeed” – Lord Richard Attenborough.

Richard Attenborough – David Attenborough's older brother – was an award-winning actor and director, known for films such as Gandhi, Cry Freedom and Jurassic Park.

He was was named Goodwill Ambassador for UNICEF on 27 October 1987 and built his familiarity with UNICEF programmes and staff during the filming of Gandhi in India and later Cry Freedom in Zimbabwe. UNICEF benefited directly from special fundraising premieres of both of these films. Premieres of Gandhi, for instance, raised almost US$1 million.

In October and November 1994, Lord Attenborough undertook an extensive mission to Africa. He returned to South Africa in November 1995, after it had ratified the Convention on the Rights of the Child, for which he had campaigned on his earlier visit. In April 2000, he visited Mozambique after it had been devastated by floods and set up a joint appeal by UNICEF and the United Kingdom’s Observer newspaper. He has also visited several UNICEF-supported projects in Thailand.

Lord Attenborough worked tirelessly for UNICEF closer to home, too, supporting many advocacy and fund-raising initiatives and working to bring children’s issues to the forefront of the political and news agenda. For example, in December 1998, he joined UNICEF Executive Director Carol Bellamy to launch The State of the World’s Children report in London, using his unique standing and skills to publicize its aims with the world’s media.

Richard Attenborough has passed away, but we remember his charity work.

Richard Attenborough has supported the following charities listed on this site:

Activity
Social reach
Google trends for "Richard Attenborough"
Available to Insiders only
Get Insider Access to these insights & more...

UNICEF UK is today mourning the death of Goodwill Ambassador Lord Richard Attenborough, who has died at the age of 90. More →

We don't have any videos related to Richard Attenborough.