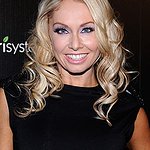 Wearing nothing but a smile and holding a bunny, Dancing With the Stars’ Kym Johnson is the star of a brand-new PETA campaign that reads, “Be a Bunny’s Belle of the Ballroom: Choose Cruelty-Free,” and encourages shoppers to buy cosmetics and household products only from companies that never test on animals.

In an exclusive PETA interview, Johnson explains that she never considered how her cosmetics were being tested until she saw Dave Navarro's PETA campaign. “I was so disturbed by what I saw,” she says. “I didn’t realize that animal testing was still being done, and it really shocked me, and it really made me think, what am I putting on my face?” So she decided to see for herself how animals suffer in cosmetics testing—and what she found disturbed her. “Living their lives in cages, being injected in their eyes, and being blinded—it’s terrifying the footage that you see, and no animal should have to suffer that way for our vanity.”

These archaic animal tests are banned in the European Union and not required by the U.S., and more than 1,300 companies have pledged to PETA that they will use only non-animal test methods. A list of these cruelty-free companies is available on PETA’s Beauty Without Bunnies website, where consumers can also order a free copy of PETA’s global cruelty-free shopping guide.