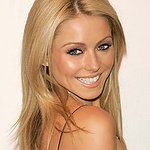 At the ceremony, Anderson Cooper presented Kelly Ripa with GLAAD’s Excellence in Media Award, which is presented to media professionals who, through their work, have increased the visibility and understanding of the lesbian, gay, bisexual, and transgender community.

In her acceptance speech Ripa said, “I celebrated my 19th wedding anniversary last week and as I was trying to come up with something impactful to say tonight, I couldn’t help but think of all of the people in this country and across the globe who have been denied the joy that I have known for 19 years […] The Supreme Court is in the midst of making some big decisions deciding the fate of marriage equality throughout this country. But it must not end there. Equality means equality across the board. We must not allow discrimination to be rebranded and used against people in other facets of society including housing, employment, and education. Like everybody in this room, I watch hoping and trusting that it will move the nation towards the same type of acceptance that my own children are growing up with here in New York City.”

Also at the event, Lynda Carter presented MSNBC anchor Thomas Roberts with the Vito Russo Award. The Vito Russo Award is named after one of GLAAD’s co-founders and the author of The Celluloid Closet. The award is presented to an out lesbian, gay, bisexual, or transgender media professional who has made a significant difference in promoting equality for the LGBT community.

In accepting the award Roberts said, “I thank my MSNBC and NBC family for encouraging me to be the best me, giving me a place to be a broadcaster and journalist covering LGBT issues with vigor, passion, and respect for all views. GLAAD you are the big brother and big sister that we all need. Let’s hear it for GLAAD because their resolve and their mission is unparalleled. I dream of a day that GLAAD’s work is done, but lgbtq-phobias and discrimination still exist domestically and internationally and we need to continue to ask our straight allies to stand with us as the LGBT community continues to break stereotypes everywhere from classroom leaders, to pro sports, political leaders, and yes, people who report the news. And that is why coming out is so empowering. For those of us with the privilege to work in media our viewers and listeners deserve to know who we really are because there is nothing to be ashamed of when this is your truth.”

Jeffrey Tambor and Judith Light, stars of Transparent, this year’s GLAAD Media Award recipient for Outstanding Comedy Series, presented the award for Outstanding TV Journalism Segment to MSNBC Live for the segment “Fired for Being Gay?” Accepting for MSNBC Live were anchor Craig Melvin and Latta, S.C. Police Chief Crystal Moore, who was featured in the piece.