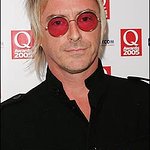 The Gibson GuitarTown exhibition will build 30 guitar sculptures across London by next summer, ready for 12 weeks of display beginning on 1st June 2007. Each sculpture will be designed and endorsed by famous musicians, including Queen guitarist Brian May.

All 30 Gibson Les Paul guitars will later be auctioned off for The Prince's Trust, Nordoff Robbins and the Teenage Cancer Trust.

Speaking about the campaign, Weller said: “I am proud to be associated with the Gibson GuitarTown London campaign as it combines my passion and appreciation for the guitar, whilst raising money and awareness for three very worthy and deserving charities.”