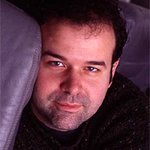 Award-winning independent film director & writer Thom Fitzgerald graciously took the time to share with Look to the Stars his thoughts about his new movie 3 Needles. The film tells three stories from the global AIDS crisis. Like a good friend, he helped me to see movies, storytelling, AIDS and myself differently — much as he hopes his movie 3 Needles will do for you.

The on-line promotion for the new film 3 Needles, written & directed by Thom Fitzgerald and starring Lucy Liu, Chloë Sevigny, Shawn Ashmore, Sandra Oh, Stockard Channing, Olympia Dukakis and Tanabadee Chokpikultong, is reminiscent of gathering ‘round the fireplace to socialize on a winter’s eve – with a few thousand of your friends.

The movie’s message about the global AIDS crisis has been taken to the MySpace.com masses. For every MySpace Friend that joins the 3 Needles MySpace page before midnight December 1st – World AIDS Day – 10¢ will go to fight AIDS in Africa. The donation, offered by the filmmakers and their sponsors, will be given to the Nova Scotia-Gambia Association, a Canadian-based African youth charity endorsed by Nova Scotia resident Thom Fitzgerald.

World AIDS Day will also mark the theatrical release of 3 Needles in select U.S. cities. Many participating theaters will be donating portions of the weekend box office earnings from the film to their local aids charities, including the New York AIDS Coalition, the Los Angeles-based AIDS Healthcare Foundation and the Boston Living Center.

“I wanted to find like-minded people who would be interested in the film – and I really wanted to divert some of our marketing money towards charities. It doesn’t reach as many people as a newspaper ad, but the quality of the relationship is good,” explains Fitzgerald on his decision to use MySpace.com as a means for publicity for 3 Needles.

And the relationship is personal – fewer than a handful of people help to maintain the 3 Needles MySpace page, including Fitzgerald himself. Due to this, their presence on MySpace.com feels much more communal than commercial.

“We’ve tried to find a good balance between the fundraising and promoting the film. We don’t want people to think it is just a shameless way to spread the word about the film. Thom and his colleagues are very passionate about helping to support AIDS relief in any way they can,” said Corey Eubanks, a publicist with Wolfe Releasing, the premier distributor of gay and lesbian feature films. Wolfe representatives were blown away when they saw the film at the Toronto Film Festival and became the U.S. distributor for 3 Needles.

“I think the real people who spend time on MySpace bring a lot of heart and passion,” said Eubanks, who created the 3 Needles MySpace page and continues to commit a great deal of time to the cause. “I want to give them something they can truly get behind. We were brainstorming ways of harnessing the power of MySpace, and I threw out the idea to use it as a fundraising tool, as well. And the wonderful Thom Fitzgerald took it from there.”

The film industry and AIDS are not unfamiliar with one another. In 1985, when the acronym AIDS was still unfamiliar in most households, Hollywood’s Golden Age leading man Rock Hudson became the first celebrity to admit to having the disease. Hudson passed away less than 3 months after his admission. At the time, actress Morgan Fairchild said, “Rock Hudson’s death gave AIDS a face.”

Hudson’s divulgence shortly before his death that he was homosexual fueled the belief that the little-known disease was a “gay cancer.” Due to discrimination, many people – including those in power – alienated themselves from all things AIDS. This falsehood also led to a flawed approach to AIDS prevention. AIDS awareness became Americanized.

Fitzgerald reflects, “Our AIDS prevention strategies grew out of our own miserable mainstream debate in the 1980s about whether AIDS was God’s punishment against gays. We should look back and be very embarrassed. ’Condoms!” shouted gays, while ‘Abstinence! Faithfulness!’ shouted conservative leaders. To this day our prevention methods are the same. We never stopped to think that what works for us would not work for Africans." He adds, “If we could just drop our own baggage, maybe we could open our minds to new ideas about prevention.”

Hollywood once again brought AIDS to the attention of the world audience with the 1993 Oscar® winning film, Philadelphia. The movie pulled at our heartstrings, but did it resonate the reality of the disease?

“Philadelphia stands out to me as the only AIDS film that really identified AIDS as threatening the American dream. [Tom Hanks' character’s] highly paid job was taken from him, so his financial success and lifestyle were under threat," he says. “Most people with HIV in our world had no job or money to begin with, so that story is less relatable to American audiences.”

With an estimated 40 million people living with HIV/AIDS, can any one movie capture the catastrophes of the pandemic?

“3 Needles aims to offer western viewers a couple of hours of different perspectives. There is no one face of AIDS – that I learned while making this movie,” shares Fitzgerald. “A virus is invisible to the human eye. The face of AIDS is determined by the person looking at it; where they were born, their language, faith, local history — all give shape to the monster.”

Fitzgerald hopes audiences will take from the film the “inspiration to think more broadly and holistically about AIDS, so that a few bright people may have bright ideas.”

At its close, the film ponders the question “When all of mankind has a common enemy in this virus, why have we not joined together at last in order to fight it?”

After watching 3 Needles, I could not help but wonder, with all of mankind’s common threads as our ammunition, how could we lose?

To join the battle against AIDS, visit the 3 Needles MySpace page and the World AIDS Day web site.