Exclusive Interview: Jeff Probst Talks To Look To The Stars 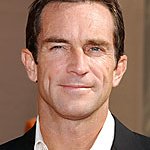 The Survivor: Gabon finale which will air December 14 marks an important milestone for ‘Survivor’ host Jeff Probst and his charity, the Serpentine Project. After the finale, there will be a special charity auction of Survivor memorabilia from this season, with 100% of proceeds going to the Serpentine Project.

In addition to Survivor memorabilia, items up for bids will include: Tickets to American Idol, Dancing With the Stars, Deal or No Deal, the WWE, Project Runway, and the season finale of Survivor 18 in New York. Additionally, fans can bid on a once-in-a-lifetime-experience of visiting ‘Survivor’ on location and hang with Probst himself! The auction starts immediately following the reunion show.

In September 2008, Jeff Probst made history when he became the first Emmy recipient for ‘Outstanding Host for a Reality or Reality-Competition Program’. The ‘Survivor’ host was kind enough to speak to Look to the Stars about his charitable efforts on behalf of his ‘Serpentine Project’, foster children, inspiration, his dream of world peace, and his latest reality show, ‘Live Like You’re Dying’.

What was the inspiration was behind the Serpentine Project and what attracted you to helping foster children transition out of the system?

A former girlfriend of mine was adopted but her first few years as a young girl were spent in foster care. I started learning about the foster care system through her stories. The more I learned the more I became interested in wanting to make a difference. As I researched the statistics of children who come up in the foster care world, I began to understand the backpack of advantage that I was provided simply because I grew up in a stable and consistent home environment. All the things you take for granted that your parents and your friends are there to provide. It was quite sobering to imagine being an 18 year-old kid who had grown up with no support, aging out of foster care and into the world completely on their own.

As a child, what did you want to be when you grew up?

My childhood dreams ran the gamut from baseball player to rock star. It wasn’t until I was in my first year of college that I really started to find my passion for telling stories.

Tell us about the online auction, how did this come about?

Every season we auction off various items from the show and donate the proceeds to a charity. This year Mark Burnett and CBS were nice enough to make my charity the beneficiary. It’s a really wonderful opportunity for us and we are trying to make the most of it. I called Ryan Seacrest, Tom Bergeron, Heidi Klum and Howie Mandel, and asked them all to donate tickets to their shows and everybody said yes! So the auction is loaded with great items, including a set visit to the next season of Survivor. Two people will get to fly to location and hang out.

Currently, you have a reality show in development called ‘Live Like You’re Dying’? Can you tell us a little bit more about it, and the inspiration behind it?

The idea behind this show is to inspire people to realize that life is meant to be lived now, not tomorrow. Too many of us postpone our real living until “we retire” or “the kids are grown.” I think most of us tend to fall into the trap of believing that there will always be another tomorrow. The truth is there won’t always be another tomorrow. Lives are stopped short every day. We are going to take someone who has a terminal illness and take them on their last adventure as their reunite with old friends, heal old wounds, maybe fulfill a once-in-a-lifetime dream they’ve always wanted to do and finally, share with us how they wished they would have been living now that they know they are dying. If we do it right it should inspire you to get up off the couch and say, ’what am I waiting on?!"

As host of Survivor what’s the most important lesson you’ve learned about human behavior, and how has it personally helped you?

On Survivor, the lesson I learn again and again is that we all tend to justify our ethics to fit the situation at hand. Survivor gives you an excuse to lie, “it’s the game that made me do it” but I have seen that Survivor is no different than normal life. We do what we want to do and then we justify it. It has helped me to see this in myself and I work hard every day to be “in charge” of my decisions and own them, not pawn them off on circumstance.

What is the most rewarding aspect of your career?

There are so many aspects of my career that are rewarding. From a strictly professional point of view, I’m very proud of the storytelling on Survivor. For 17 seasons we have kept up a standard that has never dipped. We continue to find ways to reinvent the show without deviating from the original premise. That gets tougher to do with each passing season. I’m also so grateful that I am able to parlay a bit of my recognition toward The Serpentine Project. It’s not lost on me that if not for Survivor, it would be much more difficult to raise awareness and money to help the youth in our program. I’m not above trading on the Survivor name if it is a means to an end and will help our youth achieve their dreams.

Do you feel celebrities have a responsibility to use their status in efforts to give back to the community?

I really don’t think you can assign any kind of responsibility to someone merely because they’re famous. People do what they want. If you have a voice and you are inclined to use it for good, you will. If, at the end of the day you’re more concerned with getting free clothes then you’ll probably have a full closet. I would want to be involved with The Serpentine Project whether I was on television or not. Being recognized merely helps the cause.

In terms of charitable giving and awareness, do you think we are reaching the younger generation?

I believe we have to teach each other to take care of each other. If you see someone in need, it should be a natural instinct to share with them what you can afford to live without. It’s a cliché, but this starts with the parents of the world.

Aside from family, who’s been a personal inspiration?

So many people have inspired me in my life, but there is one young woman whose approach to life has impacted me more than anyone else. Ali Mills was an eleven year-old cancer Survivor when we met doing some work for St. Jude Children's Research Hospital in Memphis. We became fast friends and although her cancer returned and Ali passed away at 13, I learned more from her about living than any other person in my life. It was as if she had been given a gift to see ahead and she was trying to share with me what was worth worrying about and what wasn’t. She wrote me a poem that I keep on the mantle of my house and refer to often.

Palau, Micronesia. The most beautiful water ever.

What trait do you admire most in others?

The trait I most admire in others is the courage to be faithful to yourself regardless of the impact it has on others.

What makes you happy?

Nothing makes me happier than love.

My most treasured possession at this point in my life are the memories of the amazing life I have had so far.

Finally, if Santa Claus were real, what would be your ultimate Christmas wish?

Peace. I would give up everything I have or will ever have if we could just find a way to live and let live.

Look to the Stars and Delinda Lombardo would like to thank Jeff Probst for taking the time to speak with us and most importantly, for making this world just ‘that’ much better.