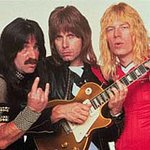 Spinal Tap will reunite onstage this July at the Live Earth event in Wembley Stadium, London.

The legendary spoof heavy metal band, led by comedians Harry Shearer, Christopher Guest and Michael McKean, gained a following through their ‘mockumentary’ This is Spinal Tap, and have teamed up once again with director Rob Reiner to support the music extravaganza by creating a Live Earth-related short film.

The short film features characters Nigel Tufnel, David St. Hubbins and Derek Smalls talking about their “charity” work, such as raising funds to help underprivileged ferrets, as well as updating fans on the career paths the musicians have taken.