Take It To The Limit With A Signed Eagles Guitar 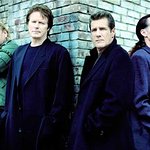 Classic rock legends The Eagles are about to set off on their 2009 Long Road Out Of Eden tour, and to celebrate they are auctioning a signed guitar for charity.

The fantastic Takamine G-Series acoustic guitar has been signed by band members Don Henley, Glenn Frey, Joe Walsh and Timothy B. Scmidt, and proceeds will go to the Alzheimer's Association.

Also going under the hammer this week for the charity are guitars signed by Miley Cyrus and Brooks and Dunn, as well as signed memorabilia from the Grateful Dead, Jewel, Fleetwood Mac's Lindsay Buckingham, Scarlett Johansson, Maroon 5, New Kids On The Block and many more.

To view the items and make an offer, head to the Charity Folks website.