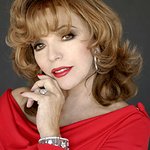 Actress Joan Collins has become the new ambassador for a British charity that focuses on donations to special children for medical treatment, therapy, specialized equipment, and dying wish holidays.

The 75-year-old star of Dynasty and author of 13 best-selling novels and self-help books will join Elizabeth Hurley as an ambassador for Caudwell Children, a charity established in 2000 by entrepreneur John Caudwell.

“John and his charity are doing wonderful things to help improve the lives of children everywhere,” said Collins. “I’m proud to be named as an ambassador of the charity and wholeheartedly lend my support to this worthy cause.”

The star is a regular attendee of the charity’s annual Legends Ball, and last year offered an exclusive auction prize of dinner with one of her fans at the event. But when bidding became heated and two rival fans were locked in battle over the prize, the screen legend offered both men the opportunity to dine with her, raising £200,000 for the charity.

“Joan is truly a British icon and we are delighted to be able to name her as one of the charity’s ambassadors,” said Trudi Beswick, CEO of Caudwell Children. “With the support of well-known personalities such as Joan and Elizabeth, the charity can continue to grow and help as many children as possible.”

The next Legends Ball – featuring Rod Stewart and Alan Carr – will take place in London on May 14.